Prime Minister Justin Trudeau’s approval rating continues to hold strong among Canadians, despite soaring coronavirus numbers from coast to coast — though a key test lies ahead.

Polling done exclusively by Ipsos for Global News showed Trudeau’s Liberals maintain their advantage over the Conservatives, with a five-point lead over the party (narrowing one point from a month ago).

According to the poll, 60 per cent of respondents approved of Trudeau’s handling of the coronavirus crisis, while 40 per cent disapproved. Trudeau’s approval went up one percentage point since last month.

The results of the poll come as Canada’s coronavirus numbers continue to break records, with Quebec on Saturday reporting 1,480 new cases, a new single-day record for new infections there. Ontario reported 1,822 new cases on Saturday, marking the second day in a row the province has reported more than 1,800 new cases.

The rising cases amid Canada’s second coronavirus wave seem to not have affected Canadian’s approval of their national leader, according to Darrell Bricker, CEO of Ipsos Public Affairs.

“I think that the biggest thing that you can say about Canadian politics over the last while is that it has been remarkably stable, even though there’s a lot of things that have been happening,” Bricker said.

“The prime minister’s approval level really hasn’t budged. He’s still at 60, which is very good for somebody who’s been known for this long by Canadian voters who tend to get worse rather than better over time. And he’s holding in there,” he continued.

The NDP would receive 17 per cent of the vote, while the Bloc Québécois would get eight per cent and the Green Party seven per cent, according to the poll. 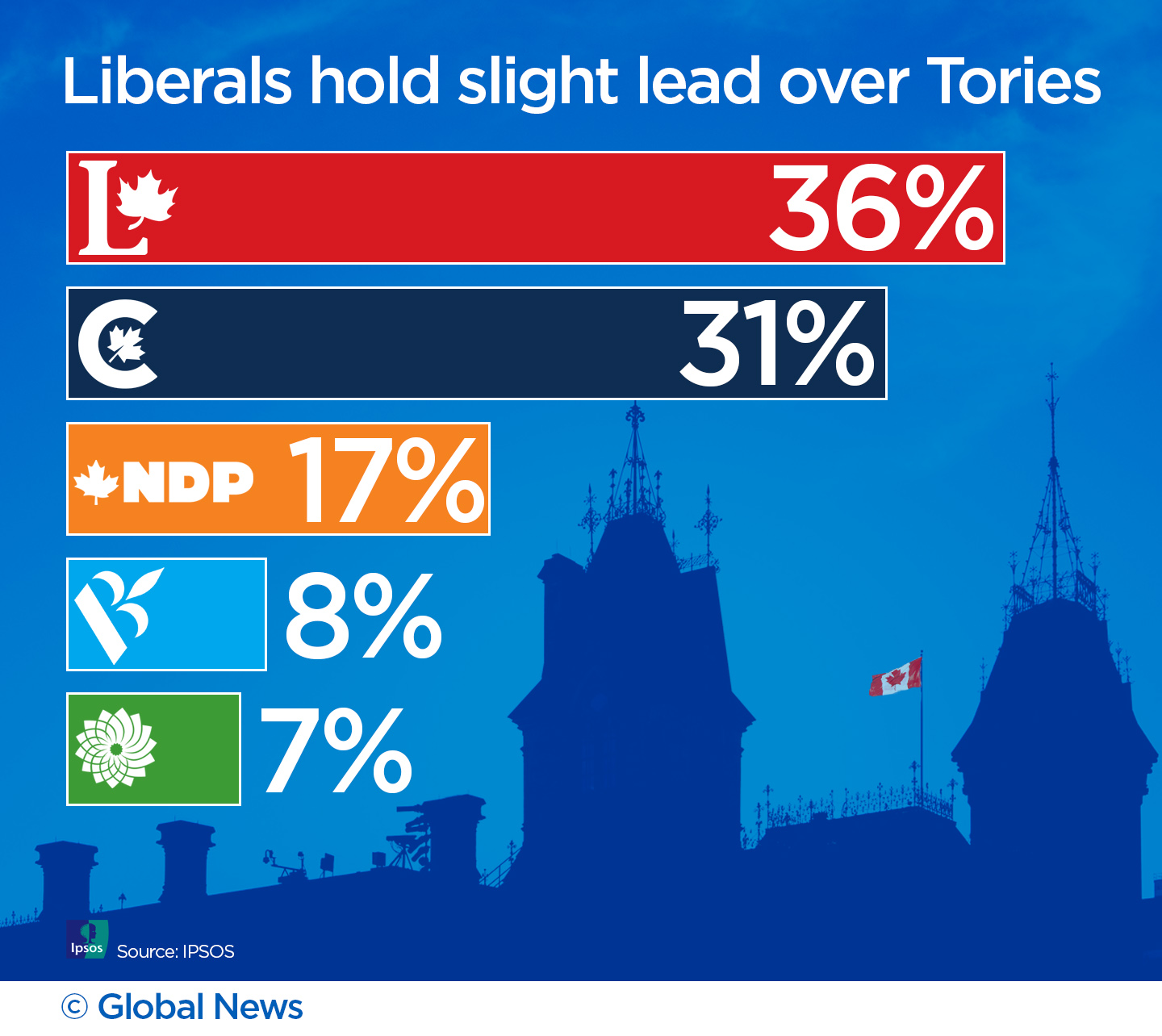 In terms of provincial approval, the polling showed that in Ontario, the Liberals (41 per cent) continue to hold a solid advantage over the Conservatives (31 per cent).

In Quebec, the Bloc Québécois (36 per cent) are statistically tied with the Liberal Party (33 per cent).

In Alberta, the Tories (57 per cent) maintain a wide lead over all other parties, including the Liberals (22 per cent).

Although Trudeau remains at a 60 per cent approval, Bricker said, most premiers have higher ratings.

Sixty-eight per cent of respondents approved of the performance of their provincial premier, while 32 per cent disapproved.

British Columbia respondents had the highest approval of their premier (78 per cent) while Alberta had the lowest approval (37 per cent).

“When you ask Canadians what they think (of Trudeau), 60 per cent say ‘pretty good.’ In every province… save one, it’s better. And the one that isn’t performing as well is Alberta, which is only at 37 per cent,” Bricker said.

“So you sit back and you say there’s obviously something happening in Alberta that is not reflecting particularly well on their provincial administration.”

Alberta has seen a spike of coronavirus cases over the last few weeks, prompting Premier Jason Kenney last week to declare a state of public health emergency, along with new restrictions that will remain in place for at least three weeks.

Bricker said although coronavirus restrictions and lockdowns may impact Canadians’ approval of their leaders, the next big issue that will also impact the country is the rollout of vaccines.

“That’s going to be the next big test,” he said.

Canada’s limited early rollout of vaccines is expected to happen in early 2021 — barring complications — and a majority of Canadians should be vaccinated against the coronavirus by next September, according to Trudeau.

METHODOLOGY: This Ipsos poll was conducted online of 1,001 Canadians over the age of 18 between Nov. 20 to Nov. 23, 2020. Quotas and weighting were employed to ensure that the sample’s composition reflects that of the Canadian population according to census parameters. The precision of Ipsos online polls is measured using a credibility interval. In this case, the poll is accurate to within ±3.5 percentage points, 19 times out of 20, had all Canadians aged 18 and over been polled. The credibility interval will be wider among subsets of the population. All sample surveys and polls may be subject to other sources of error including, but not limited to, coverage error and measurement error.