WATCH ABOVE: Darrell Bricker, CEO Ipsos Public Affairs, tells Global News that support for mandatory vaccines has dropped in the last five months most likely due a number of reasons including the perception of it being rushed, potential side effects and a lack of reassurance.

Support among Canadians for mandatory vaccination against the coronavirus continues to fall even as new infections explode across the country and public health officials urge people to stay at home.

Polling done exclusively by Ipsos for Global News shows a drop in support for a mandatory vaccine since the beginning of the month, when it stood at 61 per cent.

That support now stands at 59 per cent, a total drop of 13 percentage points since May 2020.

“They haven’t heard enough reassurance, I would say, to convince them that the concerns that they have are being dealt with appropriately or validly. And as a result of that, what we do is we end up in a situation where the more time goes on, the more worried we get.”

As well, even though 59 per cent say they would support mandatory vaccination, more than 70 per cent also say they feel nervous about taking a vaccine that was created and rolled out so quickly.

Sixty-nine per cent also cite the potential for long-term effects as a major concern.

“Until people actually get experience with a vaccine and they see what the effects have been on other people, and they’ve had a lot of reassurance from people that they trust, they’re going to be reluctant,” Bricker said.

“We see that reluctance start to grow, mostly because we’re getting closer to when a vaccine is probably going to be available.”

Coronavirus cases have been spiking across the country in recent weeks as the second wave of the pandemic tightens its grip, leading to mounting cases around the world.

Public health officials in Canada are urging people to stay home, limit their contacts as much as possible to their own household, and avoid any non-essential outings.

Read more:
A polio disaster helped shape vaccine safety. Here’s why that matters for the coronavirus

Prime Minister Justin Trudeau has warned the winter will be difficult as Canadians increasingly battle the mental health effects of nine months of isolation, economic uncertainty and shattered life plans.

Promising announcements from two frontrunners in the hunt for a vaccine have sparked hope that the roll-out of the first doses from Pfizer and Moderna could happen between January and March.

While Trudeau says the majority of Canadians should be able to get vaccinated by September 2021, those initial limited doses will go to top priority groups such as front-line workers and high-risk people.

But while the polling shows Canadians are broadly united in the belief that front-line health workers and first responders should get the first doses, that consensus begins to break down around which groups of Canadians should get it next.

Ipsos asked respondents to pick from a list of 20 categories of people and say which five should get the shot first: front-line health workers and first responders were the only ones to get majority support with 62 per cent and 52 per cent agreeing those Canadians should be first in line.

From there, though, there appears to be a range of support for who should go next.

Just under half (49 per cent) said seniors should go next, followed by long-term care home staff at 46 per cent, those with pre-existing conditions at 34 per cent and other essential workers at 24 per cent. 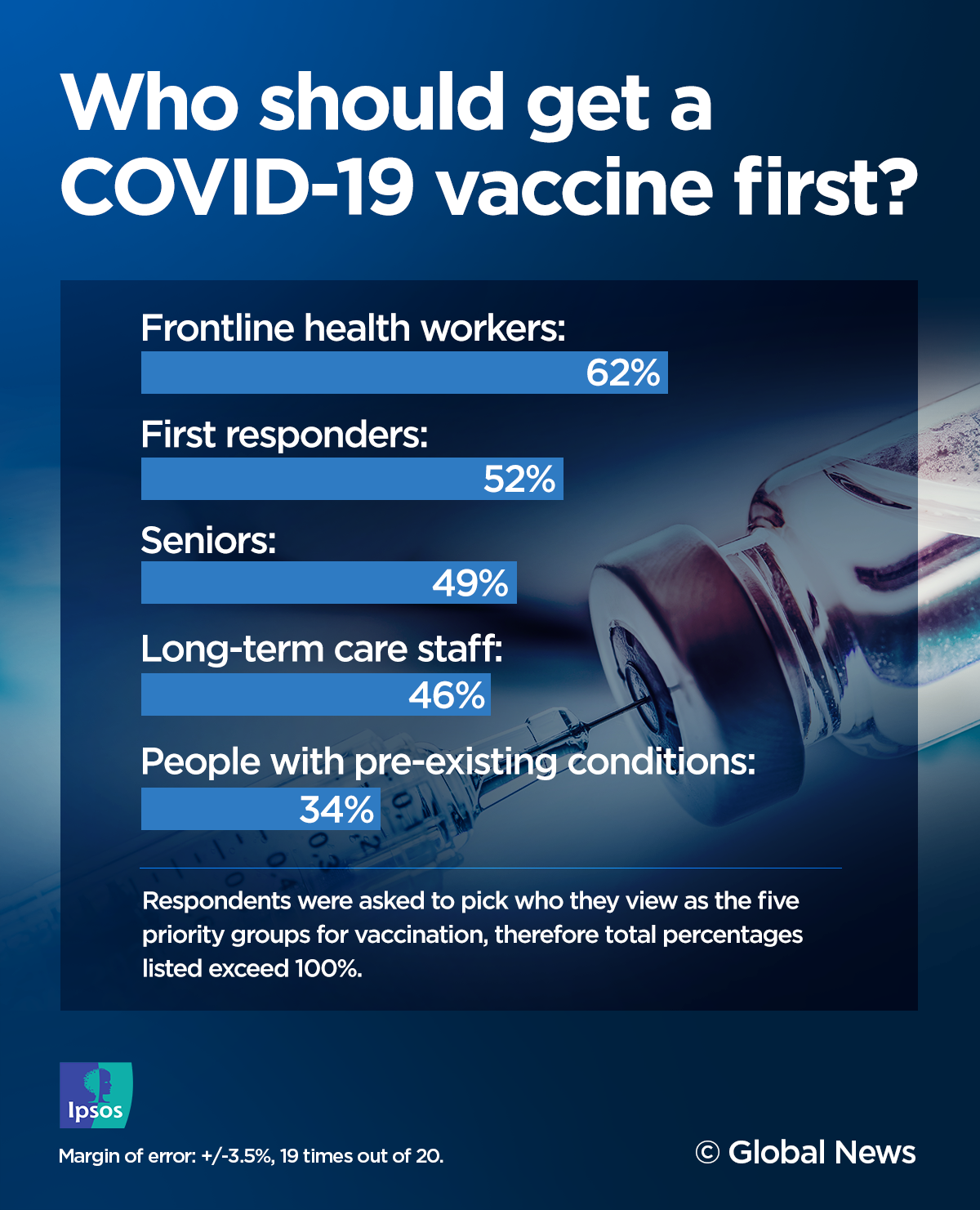 Bricker said the findings also showed that after support for front-line health workers and first responders going first, respondents were most likely to say that people who are similar to the respondents should get to go next.

“So, for example, boomers would say boomers (should get it next), Gen Z people would say Gen Z, women would say women,” he said.

“It’s sort of an indirect way of saying, ‘Once we’ve taken care of the people that everybody regards as essential, if I can be reassured that it’s OK for me, I want to be in first.”

And despite the broad concerns about the safety of the vaccine, a majority of Canadians say they believe vaccine regulators at Health Canada will do their jobs.

Fifty-seven per cent say they are confident once one is approved, it will be “completely safe.”

METHODOLOGY: This Ipsos poll was conducted online of 1,001 Canadians over the age of 18 between Nov. 20 to Nov. 23, 2020. Quotas and weighting were employed to ensure that the sample’s composition reflects that of the Canadian population according to census parameters. The precision of Ipsos online polls is measured using a credibility interval. In this case, the poll is accurate to within ±3.5 percentage points, 19 times out of 20, had all Canadians aged 18 and over been polled. The credibility interval will be wider among subsets of the population. All sample surveys and polls may be subject to other sources of error including, but not limited to, coverage error and measurement error.